Belle and the Baroness – A Review


Last night, I went with my daughter and her friend to see ‘Belle and the Baroness’, a live musical performance for women, by women, benefiting Chai4Ever, an organization that “provides practical and emotional support for families…dealing with the devastation and turmoil of the catastrophic illness of a parent.”

‘Belle and the Baroness’ is a live musical show of Broadway caliber that features some of the frum world’s most celebrated artists, breathtaking effects, and an inspirational message about beauty being in the eye of the beholder. 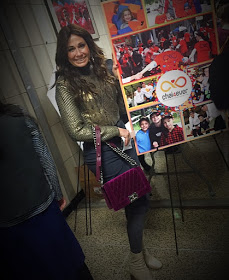 To me there is no greater joy than partaking in an event or production born out of the creativity of the combined forces of talented women, especially when done for the sake of supporting a meaningful charity. So when the lights went down and the curtains went up, I was already completely delighted and entranced. 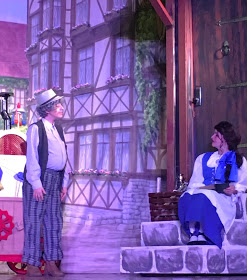 Besides for directing the play, the talented Malky Giniger played the role of Belle, and she immediately stole the show with her Broadway quality acting and singing abilities. 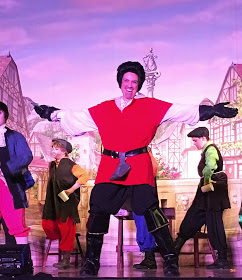 Her powerful and melodic voice, along with the other actors’ singing talents, were by far my favorite and most enjoyable aspect of the show. And as a woman who supports women pursuing their dreams and passions, I loved that this full fledged, professional production for women by women, allowed for the expression of these talents while maintaining their values of modesty. 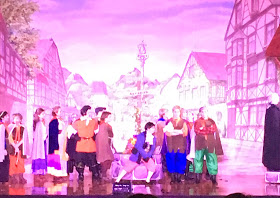 I also took great delight in the technical details of the set; its design, scenery, and set changing, all visually gorgeous and coordinated perfectly.

And as someone who when watching a movie, show or play, is often more inthralled with what the characters are wearing than what they’re actually doing, it was amazing to me how much creativity, time, and attention to detail must have gone into the costume design and creation.

And finally, the plot, lyrics, and script, creatively altered and modified slightly for this particular audience, were pretty entertaining too, and included just the right combination of humor and drama. 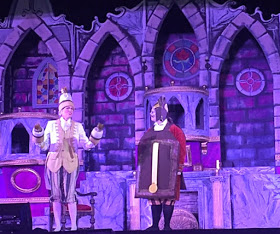 These snapshots clearly show how the performance transported the audience to a color drenched, faraway land that blossomed directly out of a classic children’s fairy tale book.

All in all, I truly enjoyed ‘Belle and the Baroness’, and would highly recommend it for a lovely evening out, full of great fun, drama, music and visual delights.

What are you doing next Motze Shabbos or Sunday afternoon?

Order your tickets for the December 5, and 6 shows now before it’s too late at www.jewishtickets.com 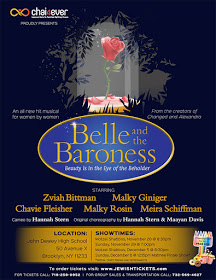